Knees over toes: Fact or Myth?

As with most training myths, the concept of protecting the knees from passing over the toes has been rooted in gym and lifting culture for such a long time that it begins to feel like a fact. It started way back in 1959 with Dr Karl Klein who had devoted his life to research of the knees. Dr Klein looked at 128 weightlifters who competed in the 1959 Pan American Games and compared them to 386 subjects with no competitive lifting experience. In a paper he published in 1961, he concluded that deep squats where the knees pass over the toes had ‘a debilitative effect on the ligamental structures of the knee’ and recommended that trainees squat to parallel and no further. A year later in 1962 this study was picked up by Sports Illustrated and the rest is history.

Recent studies which looked at knee translation may have contributed to this belief. One study conducted by Fry et al, 2003 looked at knee and hip forces during conditions of restricted knee translation. What they found was that during restricted squats where the knees were unable to pass over the toes (figure B), a 22% decrease in knee torque was recorded when compared to a regular squat (figure A). 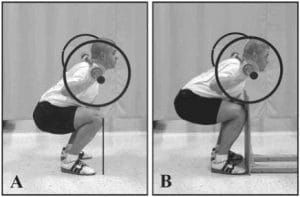 So, it may be true that limiting knee translation can decrease forces passed through the knee, but the study also recorded a 1070% increase in torque through the hips and lower back during squats with restricted knee translation. Therefore, the load has merely been shifted from the knees further up the chain and to a much greater extent.

This would suggest that a regular squat pattern distributes the loading more effectively and probably more safely to prevent overloading the hips and lower back. So not only should squats with knees passing over the toes be used in the gym, but it also occurs every day in regular life. The knees must pass over the toes during standing up from a chair to shift our weight forward, while walking down a flight of stairs or stooping down to tie our shoes. So, should all these regular activities be demonised and cautioned at damaging our knees?

Limiting the extent out knees pass over our toes will decrease loading in the knees, but this should be used as a load management strategy during acute injury or rehab phases rather than a permanent fix for knee pain. This could help decrease stress placed through the knee while rehab progresses or a flair up settles down, but forward knee translation should always be reintroduced to prepare the joint for activities where knee translation is required such as standing from a chair or walking downstairs. The key to returning to these activities is a gradual progression and easing back into these positions, especially after significant injuries or operations such as a total knee arthroplasty, ACL repair or patellar tendon repair. 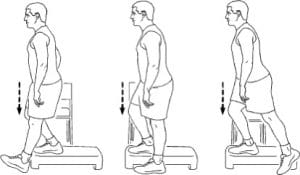 Now get out there and load those knees!

Ready to Make an Appointment?

We are Here to Help! Booking Online is the most convenient way to lock in the clinician & time you want.